VPaint is an experimental vector graphics editor based on the Vector Animation Complex (VAC), a technology developed by a collaboration of researchers at Inria and the University of British Columbia, featured at SIGGRAPH 2015. It allows you to create resolution-independent illustrations and animations using innovative techniques.

With VPaint, the lines composing your illustration or animation are not Bezier curves, but hand-drawn curves called edges. You can conveniently set the width of drawn edges by holding CTRL. If you are using a pen tablet, VPaint can use the pressure information to generate edges with variable width.

Once drawn, your edges can be easily edited à la ZBrush: simply push the curve using our sculpting tool. The radius of influence can be almost instantly changed at any given time by holding CTRL. In the same way, curves can be smoothed by holding SHIFT. The width of curves can also be edited locally by holding ALT, making possible to intuitively design curves of variable width even with a mouse. Junctions between edges are tracked by VPaint, and always preserved during editing (unlike in most other vector graphics editors, where Bezier paths are all independent from each others).

Using the paint bucket tool, it is easier than ever to color vector illustrations. Just click on a region bounded by existing edges to fill this region with the current color, creating what is call a face (= painted region). Unlike most other vector graphics editor, the face keeps track of which edges define its boundary, and thus editing this boundary automatically update the painted region. Junctions between faces are tracked by VPaint, and always preserved during editing.

At the bottom of the window, there is a timeline to let you create an animation by drawing several frames, and you can easily play/pause with the spacebar, and go one frame left or one frame right with the arrow keys. You can either draw everything frame by frame, or copy elements from some frame (CTRL+C) and paste them at another frame (CTRL+V). You can also do a special paste called motion-paste (CTRL+V) to paste elements several frames away with automatic inbetweening. 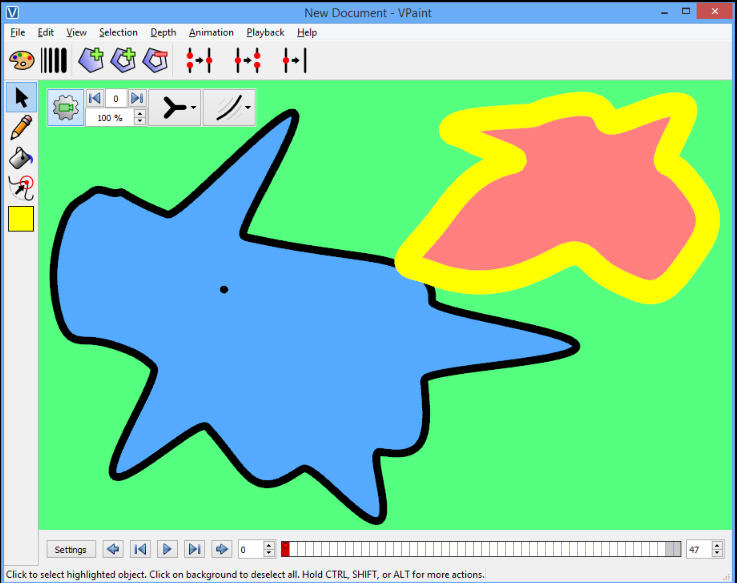