Core Parking is a sleep state (C6) supported by most newer x86 processors, and newer editions of Windows. Core Parking dynamically disables CPU cores in an effort to conserve power when idle. Disabled cores are re-enabled as the CPU load increases once again. This technology is very similar to frequency scaling, in that it seeks to throttle the CPU when idle.

The problem is that Window's default power profiles are configured far too aggressively when it comes to core parking, especially on workstations. Their interest was in conserving energy, even if this meant marginally decreasing performance. A number of complex parameters control when a core should be parked, and Microsoft tuned heavily towards power savings.

Empirical evidence shows that disabling core parking can make a real difference in system performance. There are many factors that will determine how efficacious it will be for any given system, including the CPU type, application load, and user behavior. However, we find that Windows is often over-aggressive in its core parking, resulting in excess latency as cores are unparked to accommodate bursting loads (the most common type of CPU load).

In our tests, we've found AMD processors benefit most from disabling core parking. This is perhaps due to the dramatic difference in the way AMD processors share (hardware) computational resources between logical cores. Microsoft optimized for Intel's HyperThreading, which has much less capable secondary cores. AMD's secondary logical cores are near full CPUs.

YMMV, but if we didn't see real and substantial performance gains after disabling core parking, we wouldn't have authored this utility.

These tweaks are entirely safe for any PC that is constructed properly. The only way that they could possibly seem to cause some change in behavior is if the PC has overheating issues. In such an event, those issues would be seen regardless of these tweaks by simply placing a sustained high load on the CPU. 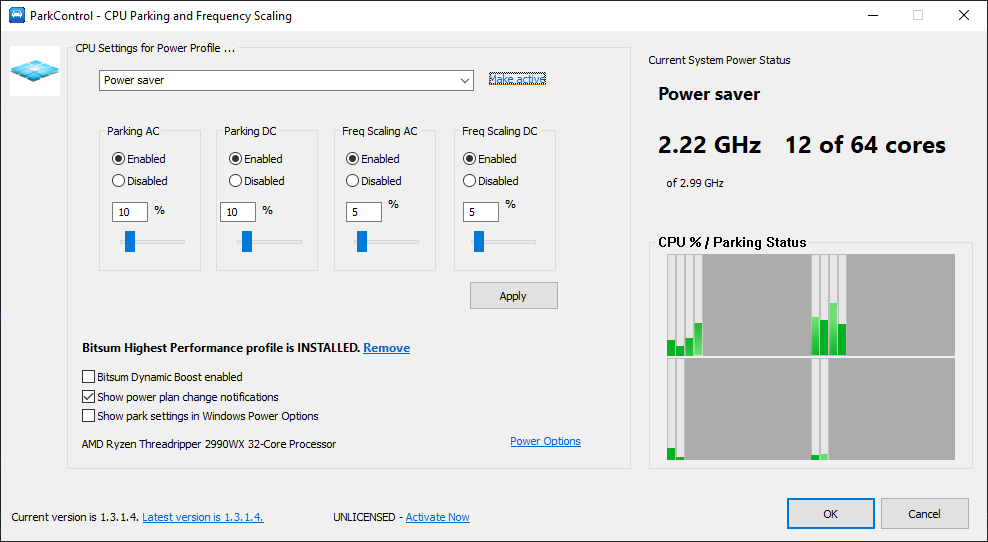